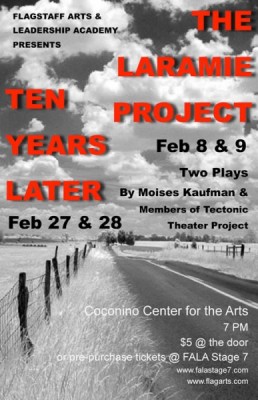 The Flagstaff Arts & Leadership Academy’s Advanced Acting class presents this moving and thought provoking production. In October 1998 Matthew Shepard was kidnapped, severely beaten and left to die, tied to a fence on the outskirts of Laramie, Wyoming. Five weeks later, Moisés Kaufman and fellow members of the Tectonic Theater Project went to Laramie, and over the course of the next year, conducted more than 200 interviews with people of the town. From these interviews they wrote the play The Laramie Project, a chronicle of the life of the town of Laramie in the year after the murder. The Laramie Project is one of the most performed plays in America today.