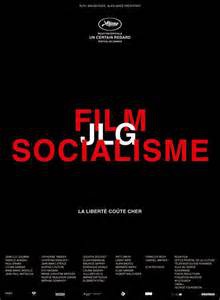 A dizzying but gorgeous three-part rumination on Old World Decadence, dictatorships, Hollywood, terrorism, religions, human history, war and nothing specifically socialist.  The film’s themes are explored through conversations that are narrated  for English speakers with subtitles the director calls “Navaho” English, a noun-heavy shorthand that has nothing to do with Diné culture or linguistics.