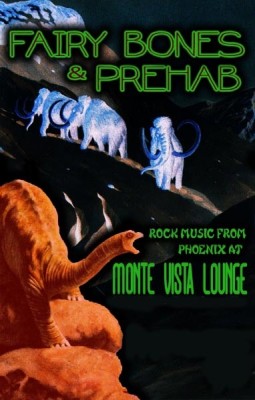 A show with two bands from Phoenix – Fairy Bones and Prehab.

With their unique brand of garage/synth-rock, a captivating, high energy live show, and an ever-growing word of mouth, the quartet of Chelsey Louise, guitarist/bassist Robert Ciuca, drummer Matthew Foos and bassist/keyboardist Ben Foos have quickly become one of the brightest up and coming bands in the entire Phoenix music scene.

Since their formation in January of 2013, the band released their self-titled EP, produced and recorded by Bob Hoag at Flying Blanket Recording, last October to rave reviews, with the Phoenix New Times calling its lead single “Like Like” “[one of ] the best things we saw, ate, and heard in 2013.”

The band has also toured extensively behind this release, with gigs including opening slots for acclaimed indie rock acts PYYRAMIDS, The Love Me Nots and The Burning of Rome, appearances at the Phochella and Sidepony Music festivals, and numerous appearances on such local radio stations as KUKQ Phoenix and 93.9 KWSS.

Having just signed onto Phoenix-based label 80/20 Records, Fairy Bones is currently working on writing and recording their debut full-length album Dramabot, which will again be produced by Bob Hoag. The band also plans on touring extensively across the South west throughout 2014, as well as preparing a multi-media promotional campaign for Dramabot that will help continue to build on the rapid momentum they’ve achieved in the past year.

Like the mythical bird that rose from the ashes, Phoenix based Prehab enjoys a story of resurrection all its own. The Arizona foursome spent the mid 1990's playing as the Bedspins along Tempe Arizona's Mill Ave, and the Southwest. For almost five years between 1993 and 1998, the band logged more than 500 live shows preforming energizing sets of mostly original songs.

The Bedspins became a songwriting machine working under producer Andy Barrett of Gin Blossoms and Stevie Nicks fame. They almost never played the same set twice because they were always adding new songs, sometimes on a per-gig basis.

Some show highlights  range from playing a taco stand in Benson, to playing Cricket Pavilion w/ Def Leppard (side stage), and Celebrity Theatre with Violent Femmes and Bloodhound Gang. In 1998, after five years of pounding the pavement, they decided to take a sabbatical exploring other interests.