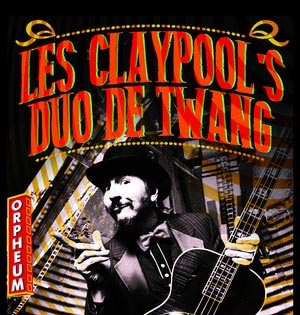 Leslie Edward "Les" Claypool (born September 29, 1963 in Richmond, California, U.S.) is a singer, lyricist, bassist, multi-instrumentalist, and composer, best known for his work with the alternative rock band Primus. Claypool's mastery of the electric bass has brought him into the spotlight with his funky, creative playing style. Claypool mixes finger-tapping, flamenco-like strumming, and a Larry Graham-like slap technique to develop his own unique style and has earned respect as one of rock's premier bass talents, becoming an influence for younger bassists in recent years.

Claypool has also self produced and engineered his solo releases from his own studio "Rancho Relaxo." In 2006 was the release of a full-length feature film Electric Apricot written and directed by Claypool as well as a debut novel South of the Pumphouse.

Opening for Claypool is the Reformed Whores.

If Tenacious D and Dolly Parton got drunk and had a baby it would be the musical comedy duo Reformed Whores! Southern bred NYC based, Marie Cecile Anderson and Katy Frame have been lassoing hearts across the country with their sweet harmonies and old-timey wit. Their debut album "Ladies Don't Spit" includes tracks like Drunk Dial, Birth Control, and Girls Poop Too. Most recently the Whores opened for Primus frontman Les Claypool and his Duo de Twang at notable venues such as the Troubadour in LA, Gramercy Theatre in NYC, Georgia Theatre in Athens, and the Neptune Theatre in Seattle. They also headlined at Zanies Comedy Club in St. Charles, IL as well as featured at Zanies in Chicago, The Improv in Atlanta, and Carolines on Broadway. You might have seen them on CBS's 'The Doctors' or hosting an episode of the Yahoo! web show 'Mansome,' you just never know where the Whores will turn up next!