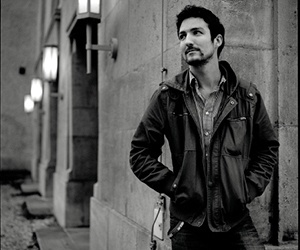 Where to begin? So I'm like all the rest, I saw an Iron Maiden poster when I was about 12 years old, and obviously thought it was cool as hell. When someone told me it was a poster for a band, well, that was me sold. My parents worried that I might be sidetracked from becoming a doctor / lawyer / whatever, and hey, they were right. So I soldiered through metal into punk rock, after a girl I met on holiday gave me a Black Flag album.

Several terrible bands and many even worse haircuts later, I found myself singing for a band called Million Dead. We were around for four years, from 2001-2005, and in that time we released 2 albums to 'critical acclaim' and 'underground success' (i.e. we weren't exactly U2). Nevertheless, we made a lot of friends and played a lot of shows, wrote a lot of songs and learnt an awful lot about playing music and making a living out of it. In the end we decided it would be best to part ways before we fell out and while we still had a chance of being a wicked underground band that no one liked at the time a decade hence (see: Slint).

So, after being chewed up and spat out by touring in hardcore, I decided it was time for something new. Remembering old Counting Crows, Johnny Cash and Weezer records that I'd hidden from my scene police friends, I started playing shows on my own with just an acoustic guitar, which also handily meant I didn't have to form a new band and deal with those kind of politics. I'm not sure I was planning on doing it for very long, but somewhere in the middle of it all I found out that folk music can be more punk than punk, and I think I found my voice.